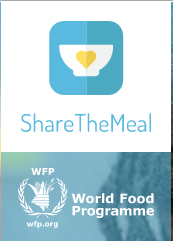 What if you could help end world hunger by just a click of a button and a miniscule donation? What if instead of purchasing coffee for one week you could feed 4 children for 5 days or 20 children for one week? With World Food Programme’s new app, “SharetheMeal”; users are able to do just that.

In Use:
SharetheMeal’s mission is to “build a world with zero hunger and ensure that every child always has access to nutritious food needed to thrive.” The idea for the app came about when founders realized that smartphone users outnumber hungry children by 20 to 1. That means if every smartphone user “shared their meal”; theoretically no child would ever go hungry.

With over 4 million shared meals; World Food Programme is on their way to wiping out hunger with their “SharetheMeal” app. By clicking on the app, users are able to share their meal for one day (equivalent of $0.50), one week ($3.50) or even one year ($182.50) with impoverished children around the world. The app is simple and concise and users click on how many meals they want to share and then enter their credit card or paypal information.

SharetheMeal works in impoverished areas of the world where they are needed the most. At the moment they are working with pregnant women and children in Homs, Syria who have been displaced by the ongoing war.  The World Food Programme hopes to stay in Homs for one year supporting approximately 2,000 women and children. Mothers receive vouchers to purchase foods like fruit, vegetables, and meat products.

Ease of Use:
This app is very simple to use. Once logged into “SharetheMeal” click on the yellow icon with a bowl located in the middle of the page to begin sharing meals.

Recap:
“SharetheMeal” is an app founded by the World Food Programme to feed hungry children around the world. With the help of smartphone users, they hope to irradiate hunger in children. Users simply log into the app and decide if they want to donate one meal or several.

At the moment, World Food Programme is working with pregnant mothers and children in Homs, Syria vowing to feed them for an entire year until they can get back on their feet after the Syrian war ravaged their country for years.

My Opinion:
I think SharetheMeal is a valiant effort to make sure that no child goes hungry. With over 4 million meals provided, the World Food Programme is doing a wonderful thing by feeding children who would otherwise have nothing.

If SharetheMeal can reach the Millennials, they could feed a lot more children. As it stands, I don’t think their app is interactive enough to hold Millennials’ attentions. Millennials are all about the “latest trend” and gets bored very easily. If SharetheMeal is going to reach them, they must revamp their app, as it lacks urgency. A celebrity ambassador may also help SharetheMeal reach Millennials such as Kylie Jenner or Taylor Swift.

Another issue they will have is how to sustain their success. We live in a generation where people get bored and once the latest trend fades, they move on to the next one. SharetheMeal must think of new ways to stay in smartphone users minds.

They is no doubt that they have an uphill battle, but for just $0.50 a day, SharetheMeal is making great strides to feed hungry children around the world.
Read 10633 times
Rate this item
(0 votes)
Tweet
Tagged under
More in this category: « Review: Qvinci Update: Giving Tuesday »

Danielle Loughnane earned her B.F.A. in Creative Writing from Emerson College and has currently been working in the data science field since 2015. She is the author of a comic book entitled, “The Superhighs” and wrote a blog from 2011-2015 about working in the restaurant industry called, "Sir I Think You've Had Too Much.” In her spare time she likes reading graphic novels and snuggling with her dogs.